Posted on 01/10/2019By tag3
Posted in BlogInspiration Awards

In honour of Wendi and in an effort to continue to inspire people to the power of physical activity and specifically Urban Poling – we are launching the Wendi Paterson Inspiration Awards for 2019!  People who will be recognized in the coming year are customers of ours who have done incredible things through their own relentless determination, but also who have experienced tremendous benefits from using our poles.

Each month, we will feature one customer who is using our Series 300, 4 Life, Adventure Series or Spirit Poles, as well as one customer who is using our ACTIVATOR Poles, and who have blown us away with their story! What we have learned over the years is that well beyond the research that supports this incredible form of fitness and rehab, people want to hear about other people, who are just like them, or maybe not like them at all, but who inspire us all to be better!  Our hope, is that the Wendi Paterson Inspiration Awards will do just that – inspire more people to realize their full potential is within their reach, by doing exactly what the body was designed to do, move!

For the month of January, our focus will be on two phenomenal people, both from the province of Alberta, whose stories we are thrilled to share.

Marguerite Friesen-Marguerite of Elk Point, Alberta confessed to never having been a sporty gal or a lover of being active outdoors. That was until she learned about Urban Poling. After taking the Certification Course, Marguerite is a PROUD Urban Poling Instructor whom even started her very own weekly walking group who meets rain or shine! Marguerite set two very ambitious walking challenges (1) to walk 1000 km in 2018 and (2) to walk 1000 miles in 2018. Marguerite admitted she was really nervous about the huge commitment she had made. However, not only did Marguerite complete her “Walk 1000 miles goal”, she did it with an astounding 51 days to spare in the year.

Or Listen to her story shared on CBC Radio (Her segment starts at 36:30)

suffered a crushed spine after a bolder dislodged from a mountain he was climbing. Doctors told Ryan he may never walk again but that did not stop him from trying. He started by just being able to wiggle one toe, then after months of extensive physiotherapy, Ryan was able to take his first few steps. Fast forward to present time, Ryan has worked his way back to walking and biking and most important climbing again.

We have been following his journey since his accident and of all the videos and articles, this most recent one by Travel Alberta shows him doing what he loves again and that is climbing.We can even see Ryan using the ACTIVATOR™ Poles while climbing! Great Work Ryan !

Here’s what Ryan had to say about using his poles while scaling the many Mountains of Jasper- “I’ve been on top of a handful of small peaks with them. The summit of Marmot Basin in Jasper was a highlight for sure! Really happy with the short film about it. Big step forward for adaptive sports in the mountains. I made sure I had them that day!”

Congratulations Marguerite and Ryan for being this month’s recipients of The Wendi Paterson Inspiration Award! Keep up the great work you are inspiring to so many !

Keeping Active in the Snow

Emily Powell and Marguerite Thomas, writers of Walk Safely this Winter, are correct when they say: “enjoying winter can 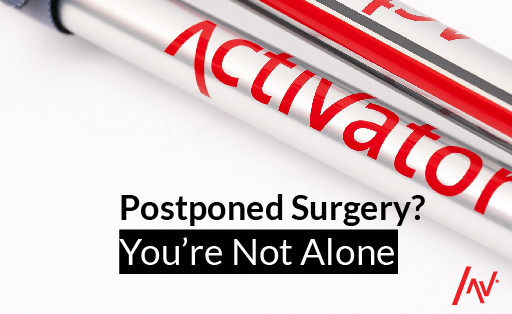 Postponed Surgery? You’re Not Alone As the days and months go by and one day blends into the